COVID-19 and pandemics of the future. Debate at MUW 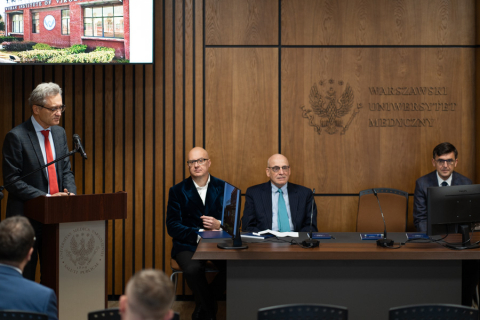 Experts discussed what we are left with after COVID, how it has changed our lives and affected public health. They also considered what to do and how to do it in case of future pandemics.

Several of them - the most important ones - were the starting point for expert discussions at MUW. The debate was attended by Prof. Zbigniew Gaciong, Rector, Ernest Kuchar, MD, PhD, vaccinologist, head of the Department of Pediatrics with Clinical Assessment Unit UCC MUW, Prof. Mariusz Gujski, dean of the Faculty of Health Sciences and the only Pole to participate in the aforementioned study. Special guest was Dr. Kenneth Rabin of The City University of New York, one of the co-authors of the article in “Nature.”

Prof. Zbigniew Gaciong recalled how the pandemic caused by SARS-CoV-2 proceeded. He stressed that medicine did not fail. Very quickly the virus was identified and a test was developed. A vaccine appeared after just one year, and in January 2022 the first drugs designed to fight the infection caused by SARS-CoV-2 were registered.

Unfortunately, one must also keep in mind the other side of the coin - the health debt that COVID has left us with. The Rector cited European data on hypertension sufferers. They showed that a large percentage of patients discontinued therapy during the pandemic due to limited access to services. And it's not just about specialized services, as 1/4 of hypertensive patients could not get advice from a primary care physician. Prof. Gaciong also referred to British data that showed the situation of people with cancer during the pandemic. The British counted how the closure of a hospital or clinic for a certain period of time translates into the number of people who will die because of it. And in the UK alone it was more than a thousand lives lost.

To prevent such tragedies in the future, the aforementioned international study was conducted. Dr. Kenneth Rabin spoke about its methodology and the recommendations that were developed. The guest from the States analyzed some of the most important recommendations, and these were:
•    A common strategy for the whole society.
•    Good and consistent communication. Messages should be simple and understandable, and multiple channels should be used to convey them.
•    Coordination of activities between ministries.
•    A "vaccination plus" concept, i.e. mass vaccination against COVID-19.
•    Cooperation with people of public trust.
•    Fight against fake news.

Ernest Kuchar, MD, PhD, also spoke about fake news regarding vaccinations in his speech.
- There is a lot of false information on the Internet, such as that "vaccines don't work because we get sick anyway despite vaccination." To debunk this, it's important to understand that it's not only important whether we get sick, but also how we get sick. During the pandemic, more than 80 percent of people became mildly ill, meaning they did not require hospitalization. On the other hand, several percent were hospitalized and a few percent were in the ICU. So the struggle was not to leave the so-called "green zone," i.e. not to go to the hospital. So even if vaccination does not prevent infection, it allows to mitigate the course of the disease, and this is of great value - emphasized the vaccinologist.
And then there is the question of safety. Are vaccinations safe? They are safe, however, like everything, they involve some risks. In this case with the risk of adverse vaccine reactions. However, let's remember that the incidence is 1 case in several hundred thousand. By comparison, Dr. Kuchar has shown how risky it is to go down the stairs (1 in 106 Americans die going down the stairs), or to ride a bicycle (1 in 4,000 cyclists die riding a bicycle) - and yet both stairs and bicycles are approved for use.

The publication in “Nature” was based on the debate, so Prof. Mariusz Gujski also referred to it. - We are dealing with the first global consensus of scientists to combat the COVID-19 pandemic - stressed the dean of the Faculty of Health Sciences, and focused on recommendations that we in Poland should especially take to heart.
- According to the recommendations, preparedness and response strategies should involve coordination of activities. And how was it in our country? Of course, during the pandemic, a Government Crisis Management Team was formed, but it lacked representatives of many groups, such as businessmen. The next issue: communication - this one floundered the most. Conflicting messages, lack of explanation and justification of decisions, such as the one to close parks and forests. Communication also failed to make use of people with high public trust. We also inadequately dealt with lies, untruths, and fake news regarding both the disease itself and vaccination against it - Prof. Gujski said. Finally, he stressed that a very big problem in our country is the lack of ongoing epidemiological research, and that the knowledge of our scientists is based on either European or global estimates.

The discussion raised the question of the strategies used during the pandemic. In retrospect, can we already judge which variant was more effective: the Swedish one (without lock down) or the American one (lock down)?
- The scientist's answer is that we need more time and restraint in judgement - said Prof. Gujski. Whereas, we already know that lock down causes economic stunting, so in the future impoverishment of society and consequent deterioration of its health. The second issue is the directly related emotional or psychological problems resulting from the forced lock down. These two arguments speak in favor of the Swedish model. So one can very cautiously say that if the Swedes had acted more effectively in the spring of 2020 to control COVID in seniors' homes and nursing homes - it would be easier to say that their strategy was better - said Prof. Mariusz Gujski. - From a population and public health point of view, mass lock down is a mistake - he added.