How to support Ukrainian nursing? Symposium at MUW 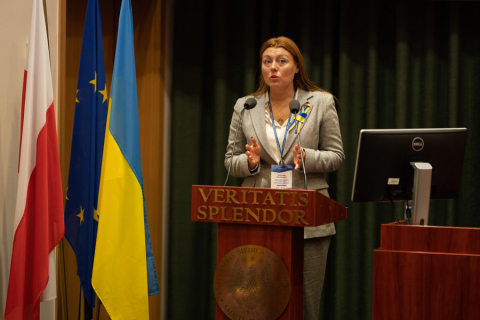 As part of an international scientific and didactic conference, experts debated for two days on how to support and develop nursing in Ukraine. And there is and will be a great need for it, as could be figured out by listening to the opening lecture given by Dr. Kateryna Balabanova, Director of the State Agency Center for Nursing Development of the Ministry of Health of Ukraine.

The conference "Support and development of nursing in Ukraine - a challenge for the nursing community in Europe" was held on November 17-18. It was organized by the Medical University of Warsaw, the Polish Nursing Association, the Supreme Council of Nurses and Midwives. International partners were represented by: the State Agency Center for Nursing Development of the Ministry of Health of Ukraine, the International Council of Nurses and the European Federation of Nurses Associations. The program of the event consisted of lectures, study visits, specialized and communication therapy workshops. Dozens of nurses came especially to the conference, representing most of the regions of war-stricken Ukraine. We learned the stories of some of them during Dr. Keteryna Balabanova's speech.

- This conference looks to the future - said Dr. Grażyna Wójcik, chairwoman of the organizing committee - It is focused on building cooperation, strengthening leaders in the health care system who will be able to manage and coordinate the processes of change in Ukraine in the next several years. In Poland, we know that this process is difficult, full of various turbulence, but we have these experiences. And we want to share these achievements and knowledge with our friends in the East - she added.

Prof. Zbigniew Gaciong, Rector of MUW, spoke at the opening about the assistance MUW is providing to struggling Ukraine: - Today's conference is one of the many activities in which our university has joined in cooperating with the tragically war-stricken Ukraine. We are the university with the earliest - as early as February 24, but also probably the largest cooperation with Ukraine in medical and non-medical areas. The rector stressed that the most important of these activities is the training of medical personnel in battlefield medicine. The lack of such courses, such skills, unfortunately resulted in huge losses among medical personnel in the early days of the war. - At the moment we have trained 500 people, from Sunday another cycle of training, this time more advanced, begins. Its purpose is to prepare teachers who will train medical workers directly in Ukraine - said Prof. Gaciong. He also invited Ukrainian students, academics, and doctors to take advantage of the academic exchange offer, made possible by funds from the National Agency for Academic Exchange and the Foundation for Education Development under the Erasmus+ program.

Ukrainian nurses and midwives after war breaks out
- Russia's terrible, bloody war against Ukraine begins today. Rockets and enemy drones are flying on peaceful cities, homes, schools, hospitals. In this difficult time, despite the danger, nurses in hospitals continue their work - Dr. Katerina Balabanova began her lecture with these words. - The nurse has to react correctly, support the patient, bring him to the right condition. At this time, some patients forget that medical workers are the same people who are afraid and worried about their loved ones - she continued. She then presented the audience with some true stories she heard while visiting hospitals in occupied parts of the country. She stressed that what she saw and heard is beyond the comprehension of a normal person. Especially when one grasps that it is happening in the center of the civilized world, in the center of Europe.

Alla from the hospital in Donetsk. The hospital was completely destroyed. Alla stayed, although the other members of the medical staff left the hospital. For a week, along with one other nurse, she helped patients evacuate until she was sure that everyone could be saved. Vira of Chernigov Hospital. The hospital was destroyed as a result of the invasion. However, Vira did not abandon her patients and, working in a shelter, helped postpartum women and newborn babies for 46 days. Out of a hospital team of 500 people, only 100 remained in the shelter. During this time, dozens of babies were born.
There were also Lyudmila, Anna, Ina... One of the nurses, 22-year-old Oksana, lost an arm and both legs during the war and now requires long-term rehabilitation. Some of the nurses, Dr. Balabanova spoke about, attended the conference. They were greeted with thunderous applause. And these are just a few examples of the heroism of medical personnel in particularly war-affected regions of Ukraine.

- We will be talking about the development of Ukrainian nursing in the coming days. We are all trying to think about what to do when we win the war. But for now, this is our everyday life - Dr. Balabanova said, presenting in numbers the situation of Ukrainian health care workers. More than 2,000 of them have lost their homes and are now living in hospitals, 33 have been injured and require long-term rehabilitation, and 104 have died at work. She stressed that these numbers are actually much higher. - We hope that what is happening now in Ukraine will end. We are fighting, but not alone. The whole of Europe is fighting. And we are waiting for victory - the speaker concluded.

Paul De Raeve, Secretary General of the European Federation of Nurses Associations in Brussels, spoke about European nurses and supporting the development of the nursing profession through compliance with European legislation. In turn, Howard Catton, Chief Executive Officer, International Council of Nurses, presented ICN's humanitarian activities and the objectives of the #NursesforPeace campaign created in solidarity with nurses in Ukraine. Issues of systemic support for victims of the war in Ukraine were also raised and the project of educational activities dedicated to Ukrainian nurses temporarily residing in Poland was discussed. Experience in the implementation and professional adaptation of Ukrainian employees in Polish medical institutions was shared. There were communication and therapy workshops and a poster session entitled "Support for victims of war in the area of social, medical and educational activities - presentations of research results, professional experience and achievements of local communities and NGOs." Study visits to medical institutions and the Warsaw District Chamber of Nurses and Midwives were organized.

The conference was held under the honorary patronage of Adam Niedzielski, Minister of Health, and Prof. Zbigniew Gaciong, Rector of MUW.