We know the results of the “Golden Scalpel 2022” award. Two MUW projects among the finalists 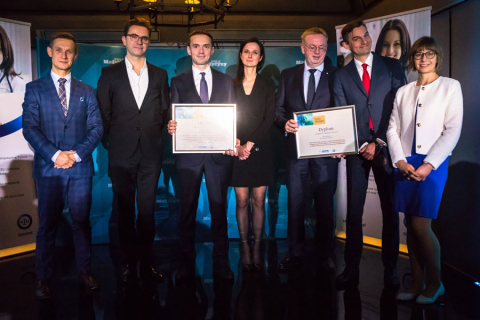 The finalists were announced on November 8 during the ceremonial gala. It includes ten projects carried out by specialists from the entire Poland. The leaders of those from MUW include Mariusz Tomaniak, PhD, MD and Adam Rdzanek, PhD, MD from I Department and Cardiology Clinic of the University Clinical Centre of the Medical University of Warsaw. Both are related to heart disease.

The “Golden Scalpel” competition has been organised by the editors of the “Puls Medycyny” magazine. The submissions were assessed by a council of 12 persons consisting of exceptional experts in various areas of medicine. It took into account, among others, the contribution in the development of healthcare in Poland in the care for the well-being of patients and the possibility of increasing the effectiveness of the work of medical personnel. In consequence, it selected ten innovative projects and their authors who change the image of the Polish, and often international, medicine.

The 3rd position was awarded to the project titled “Development, Validation and Implementation of an Innovative Method of Angiogram Analysis Allowing to Predict the Results of “vFFR Virtual Angioplasty” for the Purpose of Improving Diagnostics and Accuracy of Qualification for Interventional Treatment of Coronary Ischemia,” supervised by Mariusz Tomaniak, PhD. The team of researchers of the project include Professor Janusz Kochman, Professor Marcin Grabowski, Joost Daemen, MD, PhD and Professor Nicolas van Mieghem.
The project focuses on the improvement of current diagnostic methods and the used algorithms in the treatment of coronary ischemia which causes nearly half of the fatalities in men and nearly 30 percent in women.
The works of the team of I Department and Cardiology Clinic of the Medical University of Warsaw in cooperation with the Cardiology Clinic and Biomedical Engineering Erasmus University Medical Centre, Thorax Centre in Rotterdam and the Department of Biomedical Engineering of the Imperial College London have developed the vessel Fractional Flow Reserve (vFFR) technique. It allows for a detailed estimation of the hemodynamic significance of the pathologies and to calculate the FFR indicator in a less invasive manner (without instrumentation of coronary arteries and the administration of additional medical drugs) based on cardiac catheterization alone and techniques of computer modelling of liquid dynamics. Its diagnostic accuracy was confirmed. The works on a new diagnostic tool were concluded in 2022, it allows to forecast the final functional effect of coronary angioplasty procedure based on cardiac catheterization alone, before the invasive cardiologist implants the coronary stent. It is particularly helpful in the case of patients at increased risk of complications related to the procedure. Based on the carried out using the “vFFR Virtual Angioplasty” software, the team of medical doctors is able to take an earlier decision on the qualification for the procedure. More importantly, the analysis of the patient’s angiogram takes approximately 2 minutes, which is why it is possible to carry it out in a catheterization laboratory, thus making the works of the interventional cardiology team more efficient.

The 6th place in the ranking was awarded to the project titled “Development of the Poland’s First Comprehensive Programme of Percutaneous Treatment of Patients with Severe Tricuspid Regurgitation.” It is led by Adam Rdzanek, PhD. The team of researchers involved in the project includes Piotr Ścisło, PhD, Agnieszka Kapłon-Cieślicka, PhD, Arkadiusz Pietrasik, PhD, Ewa Pędzich, PhD and Professor Janusz Kochman.
Tricuspid Regurgitation (TR) is one of the most often diagnosed acquired heart diseases in the general population. Its presence is related to the occurrence of drug-refractory right ventricular failure, such as sustained leg swelling or relapsing ascites. They are often the reason for hospitalisation and lead to the significant worsening of the quality of life. More importantly, the group of asymptomatic and indolent patients diagnosed with TR displays an increased general case fatality ration which increases proportionally to the severity of the failure. The majority of patients were qualified for pharmacotherapy, and the primary form of therapy included the use of high doses of diuretic drugs. This resulted primarily from the poor results of surgical treatment and high periprocedural fatality rates. It has been observed in particular in the group of patients treated due to isolated TR with advanced right ventricular failure and the presence of visceral complications, such as hepatic and liver failure. The introduction of minimally invasive techniques of treating acquired heart defects caused the recent surge of the interest in percutaneous treatment methods of severe TR. They have become a chance for treatment for patients who display symptoms, who could not have been subject to the classic cardiac surgery due to the high risk related to the procedure. The I Department and Cardiology Clinic of the Medical University of Warsaw carries out a program under which the team of the Invasive Cardiology Department and Echosonography Laboratory has carried out:

Moreover, it has introduced another method of isolated repair of tricuspid valve with the use of the PASCAL system.

Professor Marcin Grabowski is the manager of the I Department and Cardiology Clinic of the Medical University of Warsaw where the awarded projects are carried out.

The competition was won by the project “Innovative Reconstructive Procedures of Craniofacial Reconstruction.” It is led by Professor Iwona Niedzielska.

This is another edition of the competition where the MUW of specialists rank in the ten projects in the finals. In 2021, the laureates included five related to our university. In 2022, two researchers from the MUW were distinguished, in 2019 – five, in 2018 – four, in 2017 – two.