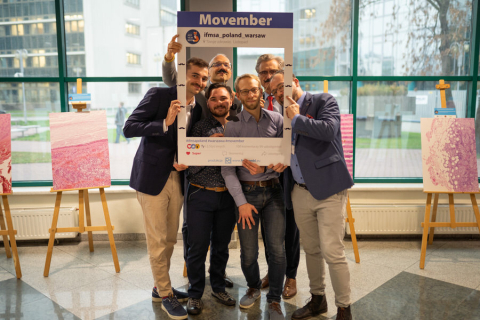 Testicular neoplasm attacks the young - it poses a particular threat to men aged 15-35. That is why, once again, the IFMSA-Poland Warsaw Branch has organised an unusual exhibition at the Didactic Centre, consisting of a dozen or so scans of histopathological preparations. Its main aim is to raise awareness of the prevention of testicular and prostate neoplasm. Since, as the organisers say, education on this subject is still very much needed. Even among students of medical universities.

November has been a month of awareness for men's neoplastic diseases for many years. Every year at this time, the Movember campaign is run. The campaign was launched in 2003 in Australia and quickly found worldwide recognition. The term Movember was originated from a combination of two words: moustache  and November. The idea is simple - for an entire month, men grow moustaches, not only as a sign of solidarity, but also to arouse curiosity and start a discussion about the prevention and morbidity of prostate and testicular neoplasms.

The Warsaw Branch of IFMSA-Poland also joined the campaign and in 2019 prepared an extraordinary exhibition of scans of histopathological preparations of the male genitourinary tract from, among others, patients suffering from testicular cancer. What do the slides depict? Among others, they show cystic seminal tubules, keratinised squamous epithelium, teratoid tumour growth or seminoma invasion of adipose tissue. The scans were prepared by staff from the Department and Laboratory of Anatomical Pathology, University Clinical Centre of the WUM. Yesterday, 14 November, the exhibition was once again on display at the WUM Didactic Centre. It will be on display until 27 November this year. It is really worth it, because in addition to the interesting graphics, it also provides a reliable portion of knowledge about proper prevention of neoplastic diseases.

Students from the Warsaw Branch of IFMSA-Poland point out that awareness of testicular cancer in the risk group is still very low. - As an organisation, we give lectures at the various secondary schools in the Warsaw area. We find that few of our listeners know at what age this neoplastic disease can occur. When we tell them that even 15-year-olds get it, they are shocked that it can affect them. Then they start asking what to do, says Łukasz Bialic, Local Coordinator for Health and Reproductive Rights, including HIV and AIDS.  He adds: - It is the same with students. Even though they have heard about testicular neoplasm, they do not have complete information. They also do not know how to perform a self-examination.

And self-examination is the best prevention. It is worth doing regularly, once a month. Take a shower beforehand. - If something worries you during the examination, you can feel some irregularities or lumps, you should go to your general practitioner for a referral to a urologist. The urologist will then perform an ultrasound of the testicles," says Robert Kołaczyński, local coordinator of the Remember project from the Warsaw Branch of IFMSA-Poland. - Often young people are ashamed, embarrassed to say that they have detected something. This area is still a taboo subject. The need for a breast ultrasound or mammography is talked about loudly, while a testicular ultrasound is still surprising. And the development of cancer is not only very fast, but also aggressive. Łukasz adds: - The recommendations of the Polish Urological Association say that people at risk should have a testicular ultrasound once a year. If we detect an abnormality but neglect it, rapid progression will occur. Not only can the second testicle be affected, but metastases can also occur in other organs.

- Testicular neoplasm has a good prognosis if detected relatively early and subject to appropriate treatment. In practice, it is between 90 and 100%. This is why self-examination is so important and this is what we want to convey by organising this exhibition every year," concludes Jan Bocinski, the originator of the exhibition.
The Movember/ Remember exhibition at the Didactic Centre is held under the patronage of Prof. Zbigniew Gaciong, Rector of the WUM. Yesterday, the Rector appeared at the unofficial opening of the exhibition. Also present were Prof. Marek Kuch, Vice-Chancellor for Student Affairs and Education, Jarosław Prugar, Deputy Vice-Chancellor for Operations, and Jarosław Kulczycki, WUM Press Spokesman.