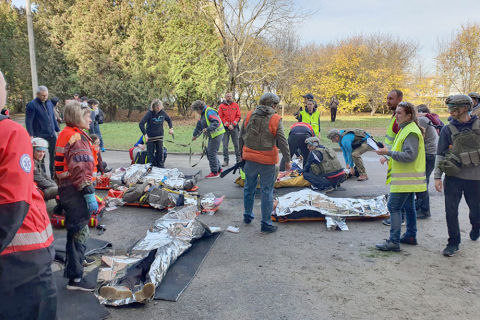 For 10 weeks in Ivano-Frankivsk, specialists from our Department of Emergency Medical Sciences and expert medical instructors from the Polish Medical Air Rescue trained 500 doctors and feldshers from Ukraine.

The main topic of the courses organized by MUW and the Polish Medical Air Rescue was advanced emergency medical activities in adults and children. The training also included elements of battlefield medicine, namely medical segregation and medical procedures adapted to tactical zones. The training courses were workshop-based. There was less theory and more practice. Participants practiced cardiopulmonary resuscitation, patient segregation, evacuation of the wounded, application of tactical stasis, decompression of emphysema, examination of the wounded in the MARCH scheme, preparation of casualties for transport, etc. At the end of the training, each participant received a certificate confirming the knowledge and skills acquired.

A single course lasted a week. After its completion, the training was started by the next group, and so on. A total of 10 groups of about 50 people were trained. Among the participants were doctors and feldshers. They came from different regions of Ukraine. Also from war-torn areas such as Zaporozhye, Kherson, Nikolaev, Odessa and Donetsk. The trainees highly praised the training and modern didactic methods, especially the simulation classes on phantoms.

The training formula and program were prepared by Prof. Robert Gałązkowski, chairman of the MUW Team for Cooperation with Medical Universities from Ukraine, and Dr. Marcin Podgórski from the Department of Emergency Medical Sciences MUW.

Rector Prof. Zbigniew Gaciong also traveled to Ukraine. He went to Ivano-Frankivsk to see how the training was going, to hand over training equipment and to meet with the authorities of the National Medical University.