The future of the cancer therapy treatment 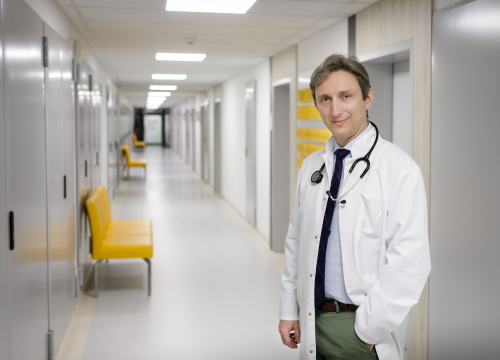 – For the first time at MUW, we carried out an innovative therapy using genetically modified CAR-T lymphocytes. Its strategy is based on making an anti-cancer drug from the patient’s own immune cells through genetic modification. This type of therapy increases the chances of curing our patient with DLBCL lymphoma increased from five up to over 40 per cent," says Prof. Grzegorz Basak, Head of the Department of Haematology, Transplantology and Internal Medicine.

What is your opinion about the patient who is being treated with a novel therapy?

She is a forty-year-old woman referred to us from another Polish centre. He suffers from a refractory, relapsed DLBCL lymphoma. There has already been involvement of many tissues including the cheek, heart and a number of others. In this particular situation, the prognosis is typically very poor. The average survival rate after two years is only 5 per cent. Classically, such patients are treated with chemotherapy. For patients who underwent chemotherapy, this treatment method worked for a temporary basis, however it is followed by a bone marrow autologous transplant. Unfortunately, most sufferrers cannot be saved. Genetically modified CAR-T lymphocytes grant an excellent opportunity for those patients. This treatment results in a clinical response achieved in almost 70 per cent of patients and it is assumed that 40 per cent will be cured. We used such therapy for the first time on 20 September.

What were the indications for its use?

Currently, this strategy is most effective in the treatment of B-cell lymphomas, especially DLBCL lymphoma and B-cell acute lymphoblastic leukaemia. There are also CAR-T therapy medicinal products approved for the treatment of other haematological malignancies, such as plasmocytic myeloma and mantle zone lymphoma. CAR-T is increasingly used in chronic lymphocytic leukaemia, and there is also registration in follicular lymphoma. It can therefore be seen that the range of indications is widening every year. Unfortunately, today this is not a very effective strategy in case of solid tumours. But I think that in the future, if certain barriers are overcome, CAR-T lymphocyte therapy will find wide application in many cancers.

What is CAR-T lymphocyte treatment and its novelty?

The therapeutic strategy is based on making the drug from the patient’s own immune system cells through genetic modification. In effect, the immune cells become “programmed killers” for a specific cancer. Genetic reprogramming occurs outside the organism. And it is a permanent reprogramming. The altered cells are potentially expected to function in the patient’s body for many years. This strategy is about breaking down the psychological barriers and fears associated with genetic modification in medicine.

T lymphocytes are genetically modified. What is their role in the body?

These are the cells of the immune system that defend us against both infection and the development of cancer. However, they do not always succeed. T lymphocytes can simply “miss” tumour cells, especially as there are no specific lymphocytes against a particular tumour. It also happens that tumours produce factors that jam the immune system cells. The oncological disease then progresses and the T cells ignore it. Genetic modification teaches immune system cells once again how to recognise cancer. It even forces them to do so. With the modification, the lymphocytes also strengthen their weapons, i.e. the mechanisms by which they can kill cancer cells, while increasing their numbers in the body as required. It is therefore a kind of living, intelligent medicine.

At present, indications are very narrow because the strategy is extremely expensive. Its use is therefore limited to very narrow groups of patients, particularly those with a high burden, in whom the benefit of an innovative treatment has been demonstrated. Once the patient has been identified and the appropriate tests have been performed on him or her, he or she is qualified by a nationwide coordination team. If we have his consent, we collect lymphocytes from the patient's peripheral blood by so-called apheresis, which is a method of separating these cells. The intake takes place at the centre of our clinic. The lymphocytes obtained, after the necessary tests, are sent to external specialised laboratories. There, genetic modification is carried out, during which specialised tumour killers are created. A genetically modified product comes to our clinic – a drug that we administer to the patient by intravenous infusion. Beforehand (depending on the condition), chemotherapy is administered to temporarily suppress the immune system. After administration of the modified lymphocytes, we subject the patient to especially intensive monitoring for a fortnight. We are aware that this type of therapy can lead to very severe complications. They are indirectly linked to the fact that the treatment works. For example, cytokine release syndrome, so-called CRS, or neurological complications, neurotoxicity, can occur, which is often very severe. However, in most cases we know how to deal with such toxic effects.

If it is fine after two weeks of follow-up, is it a signal that the therapy has been successful?

It has been four weeks since the therapy we provided. The patient is in good condition with no severe complications. Probably its most dangerous period is behind it, although the risk of complications remains. At this point, however, the most important thing is whether the CAR-T lymphocytes can cope with her tumour. Our main thought is whether she will be cured. The first main cancer control will take place three months after CAR-T therapy.

What are the plans for the future? Are more patients waiting for innovative treatment?

There are already seven patients waiting for treatment with genetically modified CAR-T lymphocytes at our clinic. We are a reference centre and almost every week we receive requests to treat more patients. These patients, for the time being, are treated under the NHF drug programme. On the other hand, several clinical trials are planned to start the therapy in the near future. This will include the treatment of patients with adult B-cell acute lymphoblastic leukaemia, as well as patients with other lymphomas and plasmocytic myeloma. Some of these activities will be funded by the Medical Research Agency through two awarded grants.