Studying opens you to the world 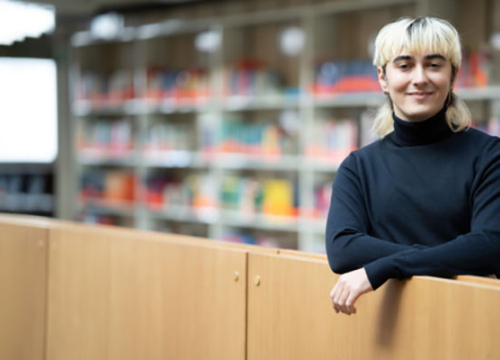 At the beginning of the academic year, we give the floor to Arkadiusz Kołodziej, a sixth-year medical student at the MUW, a trainee in the prestigious Fulbright program and co-creator of the hospital on the moon project.

Do you remember your first inauguration of the academic year - what were you thinking then, what were your plans?

I was convinced that I was going to be a great neurosurgeon like the characters in the "Grey's Anatomy" series I was watching at the time. Later, once I had contact with patients and saw what a surgeon's work was like, I realized that it wasn't quite for me. But I remember being very excited at the inauguration. I found myself in a new place, because I wasn't from Warsaw, I was starting a new stage. The move gave me a lot of excitement. And then the first year. It is said to be the most difficult, but for me it was not so difficult. There is a bit of an exaggeration in the opinions that a person is constantly learning and has no time for anything else. It's a matter of organizing time.

You have just returned from the prestigious BioLAB Program run by the Polish-American Fulbright Commission. What does it take to get there?

BioLAB is a one-year internship for students in the biological sciences at four American research institutions: University of Virginia, University of Chicago, Oklahoma Medical Research Foundation and UT Southwestern Medical Center. It is designed for students of biological sciences. I found out about it quite by accident. A colleague, who is interested in various opportunities to travel abroad, sent me the information. I decided out of curiosity. First I filled out an application on the Fulbright website. Then there were interviews with the representatives of each of the four American universities participating in the program. What mattered most was commitment and motivation. The fact that I am a medical student, so I don't have a lot of laboratory experience, was not a problem, because I showed that laboratory work interests me a lot and I want to learn it. Participation in the MUW Microbiology Student’s Club was also useful.

What exactly did you do as an intern?

I decided to go to the University of Virginia in Charlottesville in the eastern U.S. state of Virginia. I worked in the anesthesiology clinic in the team of Prof. Zhiyi Zuo, a scientist from China. His team consisted mainly of Chinese people. Later, the group became more international, as Americans and a student from Ghana joined. Each was involved in a separate project. My research dealt with sleep, or rather the changes in sleep structure that occur with aging. In both animal models and human studies, it has been confirmed that there are differences in sleep patterns between old and young individuals, and these relate primarily to a shortening of the REM (rapid eye movement) sleep phase in older individuals. The REM phase is extremely important in terms of learning, the process of remembering and consolidation of memories. In my project, I focused on the topic of the gut microbiome, which is hot in science. It is already known to have an impact on our brain function, possibly including mental health and cognitive functions. Interestingly, it is also known that the gut microbiome also changes with age - both in mice and other mammals, as well as in humans. We hypothesized that sleep changes are linked to changes in the microbiome. To see if this was indeed the case, I had to implant mice with special electrode implants so that the rodents' brain activity could be read during sleep. In the next step, I performed bacterial flora transplants between different age groups of mice. After transplanting the "young microbiome" into older individuals - their sleep pattern changed and was more similar to how younger rodents sleep - REM phases occurred more often and lasted longer! So it turned out that the correlation exists. While it's obviously too early to draw definitive conclusions, potentially changes with age in the gut microbiome could be one of the reasons why sleep problems and cognitive decline are far more common among the elderly than in younger people.

What important things has the Fulbright program given you?

I learned laboratory techniques well. I also gained the perspective of doing my doctorate at a foreign university. I know that most people get into doctoral programs in Europe and the States without any problems after this program.  Besides, working in a multicultural team, clashing with a different culture, made me even more open to the differences between people. I think now it will be much easier for me to cope with working in multinational groups. The internship was really a fantastic adventure.

To go on an internship, you need to have a high average. Do you have any tips to study effectively?

A big drawback of our education system is that in neither elementary nor high school does anyone teach us how to study. As a result, many people mechanically take notes in class and then read them hundreds of times without focusing enough on what they are reading. This kind of learning is not very effective. It's good to use your imagination. When I was still reading fantasy as a child, I would imagine the places I was reading about. These images stayed in my mind for a long time. Anyone who read Harry Potter as a child still knows what Hogwarts looks like. But not everyone who studied biology knows how the brain is built - perhaps because they never tried to visualize it. Visualizing what we learn is very helpful. In cognitive science, people talk about building a memory palace. It's a trick that involves tying different elements together. Using our imagination, we can arrange individual images-information side by side, so that they are then associated with each other. I don't know if this method is for everyone, I find it very helpful. I also don't like to repeat the same thing many times. When I study, I use different sources. Then, even when I read about the same topic, I gain new insights. When we study intensively, it is also good to get enough sleep. It is while we sleep that our brain encodes the assimilated information. It's an individual issue for everyone, however, getting enough sleep has decidedly better results than cramming in the night before an exam. And studies confirm this!

How do you like studying at MUW, what is the most valuable thing here?

There are a lot of scientific clubs at the university, more than 200! This is a huge value. You can develop yourself among people interested in the same field. I was a member of several clubs, and I expanded my laboratory knowledge primarily in the Microbiology Student’s Club. MUW also offers practical classes in many hospitals with diverse patients. This allows us to get an idea of what we would like to do in the future, and what is not for us. Workshop classes, where you can learn to practice on simulation equipment, are also very valuable.

In addition to medicine, you also have other interests. Where did you get the idea for the lunar hospital project?

I'm interested in space, especially space medicine. It all started when I went to Madrid as part of the Erasmus + program conducted at MUW. There I saw an advertisement that was related to an analog space mission. Analog missions involve simulating space conditions on Earth. This takes place in specially designed rooms called habitats. Interestingly, the analog space mission I signed up for was to take place in Poland. So, after returning from Erasmus, I locked myself in a habitat for six weeks, where a study took place on the effects of diet and light conditions on daily functioning in space. During this analog space mission I met other people interested in space, the InSpace group (https://innspace.pl). With them I later participated in designing a base on the moon. It was a competition of one of the American foundations and involved designing a house on the moon. My colleagues and I decided that it wasn't as interesting as a hospital, so we designed a hospital. Thanks to this I learned a lot about human physiology in space.

You have your final year of study ahead of you, what's next?

My immediate plans are to get a PhD and work in a lab. Then probably a specialization. Actually, from the beginning of my studies I have been interested in psychiatry. I think I will go in that direction. However, I am open to changes that may still come. Over the past years I have learned that it is worthwhile to follow your desires, to seek your path. It happens that sometimes we underestimate our capabilities, we think that something is too prestigious, too elite for us. Meanwhile, it is always worth trying to get it. Even if we fail, we can draw conclusions and learn something.