To understand a parasite 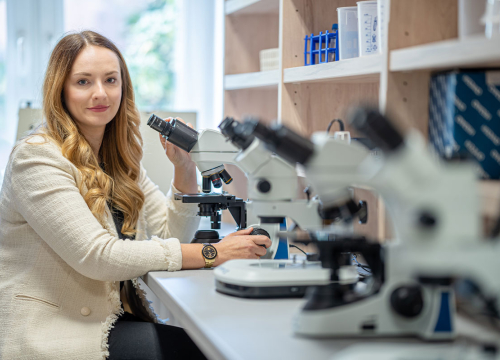 Despite the facts that parasites continue to have a severe impact on human and animal health, our knowledge regarding their biology and the complexity of the molecular interactions between the host and parasite still remains very limited to this day. Due to that reason, the research focusing on the molecules which take part in the in the parasite-host interaction is of crucial importaance, both cognitivally as well as practically, writes Anna Sulima-Celińska, PhD from the Department of General Biology and Parasitology at the MUW.

In recent times increasing attention has been paid to the immunomodulatory mechanisms used by parasites in order to survive in the host organism. It seems that a number of parasites also have the ability to influence the course and development of diseases, including the protection against or mitigation of autoimmune diseases (such as inflammatory bowel disease, multiple sclerosis, type 1 diabetes, rheumatoid arthritis). Additionally, the scientific discipline referred to as neuroparasitology which exampnes the impact of parasitic organisms on the functioning of the nervous system of infected hosts. We have also started research in this area in strict cooperation with the Chair and Department of Experimental and Clinical Pharmacology at the MUW supervised by Prof. Dagmara Mirowska-Guzel, and researchers from the Institute of Parasitology of the Polish Academy of Sciences.

Research on human parasites tend to be difficult due to ethical reasons among others; and the studies involving cell cultures unfortunately has major limitations. This problem can be overcome by using model organisms and systems. In our study we use the rat tapeworm system Hymenolepis diminuta – laboratory rat. It should be noted that H. diminuta is one of the most important model species of modern experimental parasitology. Scientists use it, among others, in the search for new drugs or diagnostic methods and in the study of biochemical processes, immune responses and other interactions in the parasite-host system. Although the most common definitive hosts of H. diminuta are rats, it can also cause infections in humans. Because of that reason, among others, it is considered an ideal model organism for the study of parasite-induced processes which can also occur in humans.

Infection with H. diminuta occurs by ingestion of infected insects or contaminated food containing the invasive form – the cysticercoid. In the small intestine of the final host, the cysticercoid transforms into the adult form of the tapeworm and parasitizes there. In principle, infections caused by H. diminuta are asymptomatic and the parasite itself does not cause major pathological changes in the host’s small intestine. However, its presence has na impact on what happens in the intestine and stimulates the host’s immune system to act. In order to evade the host response, both at larval stage (cysticercoid) and the adult tapeworms produce a number of proteins that allow invasion, immunomodulation and subsequent survival in the host's hostile environment. Such proteins are designed to act on the host’s immune system, modifying its response to parasite infection and guaranteeing the parasite’s survival. It appears that some parasites, by altering the host's immune response, contribute to the alleviation of certain diseases or influence behaviour. Hence, so much attention has been paid to analysing the effect of parasite proteins on the inhibition of autoimmune diseases and allergies. Indeed, the numerous immunomodulatory properties of such proteins can lead to a shift in the type of immune response induced and have a direct effect on the polarisation of macrophages – some of the first cells involved in the immune response in parasitic invasion.

Previous research by a team from the Department of General Biology and Parasitology, of which I am a member, conducted in collaboration with the Institute of Parasitology of the Polish Academy of Sciences, has made it possible to learn about the proteome (a set of proteins present in the cell), immunoproteome (all proteins with immunoreactive properties in a given cell) and surfaceome (a set of surface proteins) of H. diminuta. The studies made it possible to identify potential proteins - altering the immune response, including multifunctional proteins (moonlighting proteins). Multifunctional proteins are, for instance, conserved enzymes that have acquired an additional function through evolution. Examples of such proteins in parasites are, for instance, those with immunomodulatory properties. It is thought that in tapeworms they may play an important role in communication with the host organism, but their role is not yet known.

From our studies, we know that multifunctional proteins - including enzymes - with putative immunomodulatory properties are present on the surface of H. diminuta. The sustained release of these immunomodulators by the parasite alters and modifies the action of the host immune system. However, both the mechanism of this process and the exact action of the individual proteins are almost unknown. Therefore, the aim of the project I have lead, was to clone, express and characterise selected enzymes with immunomodulatory potential: phosphoglycerate kinase and pyruvate kinase, which are part of the immunoproteome and surfaceome of the tapeworm H. diminuta. The aim was to obtain the above proteins in the form of recombinant proteins and to analyse their function in order to identify the molecule(s) with the desired anti-inflammatory properties.

To realise this objective, I carried out the following experiments:

- determination of the influence of macrophages polarised by the proteins on the type of induced immune response.

- determining the effect of macrophage proteins polarised by proteins on the type of immune response elicited. This was possible thanks to an earlier research project, carried out jointly with the Department of Medical Genetics (Professor Rafał Płoski is head of the department), in which we were able to learn about the genome of our tapeworm and the sequences encoding individual proteins.

The experiments performed allowed us to obtain two recombinant multifunctional proteins and to gain a preliminary understanding of their effects on human macrophages and the type of induced immune response. However, verifying their exact function and mechanisms of action requires further analyses, which is currently our goal. 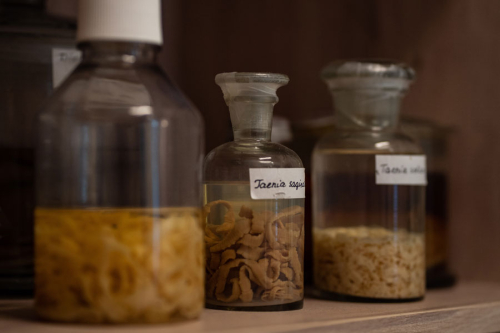 As is usual in science, the experiments carried out and the results obtained open up many new avenues and are a prelude to further projects in which it will be possible to clarify the exact role of individual proteins in parasite-host interactions, as well as their role in the invasion process and survival strategies in the host. To do this, we are conducting further in vitro experiments (cell-based studies) and then plan to infect experimental animals, including animals with induced models of human disease. If the immunomodulatory nature of the selected proteins could be confirmed, especially in animal models of autoimmune diseases, this would perhaps allow this knowledge to be used in medicine, e.g. to develop immunosuppressive therapy targeting macrophages. The information obtained in the future could also help to identify potential proteins with applications in immunodiagnostics or the selection of new drug targets.