Criminal histories written in the genes 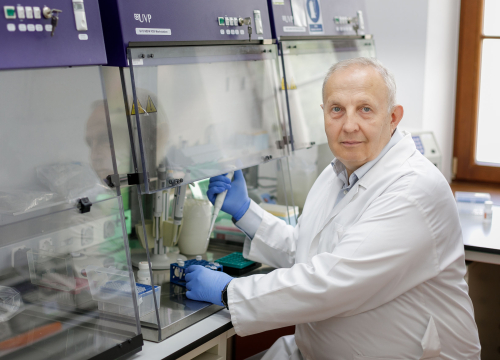 In many court cases, genetic expert opinions are important evidence. These can help, among other things, in establishing the disputed paternity, identifying Jane Doe and in criminal cases. We talk with Associate Professor Ireneusz Sołtyszewski, Head of the Genetic Laboratory at the Department of Forensic Medicine of the Medical University of Warsaw, about what genetic research in forensics consists of and what are its strengths and weaknesses.

Genetic testing in forensic science is an essential tool for investigators today. And what was there before that?

Serological tests. It all started in 1900 when Austrian physician Karl Landsteiner discovered blood groups. The first laboratory performing tests for trial purposes was established in 1904 in Switzerland. In 1911, the Polish scientist Ludwik Hirszfeld showed that blood groups in the AB0 system inherit according to Mendel's rules. In the 1950s, HLA group systems and the first plasma protein systems were discovered, and in the 1960s, the first enzyme group systems. Classical blood tests were based on the analysis of polymorphisms of, for example, proteins and enzymes, and the presence or absence of surface antigens. As blood groups and enzyme systems developed and became known, they began to be used in research for law enforcement and the administration of justice. However, the possibilities of this method were limited. When we had the blood and traces of blood from a suspect at the crime scene, there was only a certain probability of identifying the donor. Only exclusion was certain, i.e. when the blood group of the marker in the trace and that of the suspect differed. The size of the footprint also mattered. We needed a large amount of biological material to be able to determine a serological profile from it. It must also be remembered that biological traces, particularly the serological agents they contain, are highly susceptible to degradation processes occurring, for example, under poor environmental conditions. Poor footprint protection resulted in rapid degradation. Genetic testing has proved to be a significant breakthrough compared to serological testing. It has become possible to isolate genetic material even from minimal amounts of trace. Moreover, above all, with comparative material, it is possible to match the biological trace found to a specific person with a probability bordering on certainty.

The description of the DNA molecule model appeared in 1953. It took more than 30 years for it to be used in forensic science. Why?

The structure of the double helix was discovered in 1953 by Francis Crick and James Watson. In 1985, a team led by Alec John Jeffreys discovered polymorphic minisatellite sequences and introduced the technique of "DNA fingerprinting". With this discovery, the use of genetic testing in forensic cases could begin. The English did this in 1985-86 in an emigration case and then in the rape and murder of two women.  In Poland, the first genetic expertise was performed in 1989. At the same time, the massive international Human Genome Project was launched in 1987. The realisation of this project made it possible to discover, among other things, polymorphic DNA structures referred to as Short Tandem Repeat, which are now standard markers used in forensic investigations. They allow the analysis of even small fragments of DNA and even when the biological trace has degraded.

A biological trace is tested. This can be blood, saliva, sperm, or a piece of muscle or bone tissue. The research process consists of several stages. The first is the extraction of DNA from this biological material. Depending on the type of this material, we have suitable insulation methods. Once this is done, we quantify the amount of DNA.  This allows the components of the PCR reaction to be selected accordingly.  This is a crucial stage of laboratory testing. PCR reaction - the chain polymerase reaction allows a duplicate of the trace genetic material to determine its profile. The multiplied genetic material is then analysed on sequencers to determine the DNA profile. The DNA profile can then be compared with another DNA profile from the case. This is the final stage in which the expert compares the profiles obtained and determines whether they match. The entire testing process should occur under conditions that prevent the application of foreign DNA to the evidence. Strict procedures are in place to prevent contamination. It is worth mentioning that until a few years ago, such research and analysis took several days. Today we are able to complete them in less than 48 hours. This is of particular importance in criminal cases where the court has to decide on pre-trial detention for the suspect.

What types of cases are most commonly associated with tests carried out in the Genetic Laboratory of the Department of Forensic Medicine?

One of our areas of activity is research to establish parentage, including establishing disputed paternity in cases of paternity denial. The commissioners of such studies are mainly the family courts. The mother, the alleged father and the child report the material for the tests simultaneously. Oral swabs are routinely taken. To make the examination less stressful for the children, we have prepared a particular room with colourful walls and lots of toys.
However, collecting genetic material from the parents and the child on site is not always possible. Sometimes we have to wait for DNA samples from abroad when the child's alleged father resides there. It also happens that paternity must be established when the father dies. We recently had such a case. A man died of cancer during his paternity case. He did not have time to report to us for a DNA test. It turned out that the medical facility where he was treated had a blood sample. As a result, his paternity could be confirmed.

Moreover, can other degrees of kinship also be established through DNA testing?

Of course. In this case, however, we need more information and context, preferably a family tree. We will not read much from the two anonymous samples.
We recently did genetic testing on two women who thought they might be sisters. Furthermore, indeed they were. They were placed in an adoption centre as children and then separated. They have now found each other as adults.
We also performed a study on behalf of a young man. He wanted to check to what extent he was related to his uncle. The uncle was already severely ill. Almost on his deathbed, he confessed to the boy that he was probably his father. Our research confirmed this, which clarified the issue between the men and served to sort out inheritance issues.

And the identification of missing persons who have died?

We have about a hundred such studies a year. Sometimes these are homeless people, sometimes those who have committed suicide or been victims of crime. Disappearances in Poland are a major social problem. Every year, between 17,000 and 20,000 people die in our country. The vast majority are found, but 5-10 per cent are permanently missing. There are more than 4,500 remains in Poland that have never been identified. In the North Cemetery in Warsaw, we have entire quarters of people buried as NN (surname unknown). Genetic material was not taken from the people buried there because there were no regulations requiring this for many years. It is only now that we have a new order from the Chief Superintendent of Police which mandates the collection of genetic material before an unidentified person is buried.
However, let us return to our research. People who search for relatives donate their own genetic material. Then, when the body of a person of undetermined identity is found, the DNA taken can be compared with that obtained from the family. Furthermore, we have the answer as to whether it is missing or not. Sometimes, however, there is a lack of comparative material. We had, for example, the case of a deceased homeless man. He was found long after death, so the state of transformation of the corpse was already very advanced. Police officers have identified who he may be. Let's call him Jan Kowalski. However, it turned out that Kowalski had no siblings and his parents were already dead and cremated - thus destroying the genetic material. It was then decided to exhume the grandmother of the alleged Kowalski. Her bone material was in perfect condition. We took samples, compared them with the deceased's genetic material, and confirmed that it was Kowalski indeed.
If comparative material is lacking, ante mortem material can also be consulted. When, for example, a person's body is found in a flat, but there is no one to confirm that it is the owner, then objects found in the flat can be used for comparative examination. It could be a toothbrush, a hairbrush, or razor. We take material from them, determine the DNA profile and compare it with the deceased's.

Do you also identify the perpetrators of crimes by means of DNA testing?

This is our third area of activity, which is another 100-150 studies per year. In criminal cases, in most cases, we get a package of material. These are biological traces revealed from the scene and comparative material, i.e. samples from the victim and, if we have a suspect, from the potential perpetrator. The footage from the scene is very different. Sometimes it is clothing, sometimes an instrument of crime - a knife, an axe. This physical evidence requires very meticulous and repeated examination. We look for traces of saliva or blood on them and, in sex crime cases, semen. For this, you need a detective vein and experience. Here we have a very inquisitive team. Dr Magdalena Konarzewska, dr Anna Fiedorowicz and mgr Krzysztof Żak have many years of experience in providing forensic expertise. Patience and sometimes a bit of luck also come in handy in genetic testing. We recently investigated a murder and rape case. We found a bite mark on the body of the victim. We presumed that a criminal could have done it. We tried to take samples from the site. It was possible to collect microscopic traces of saliva, isolate DNA from them and profile them. Genetic material was then taken from the suspect. The determined DNA profile from the trace was consistent with the suspect's. The sensitivity of genetic testing also makes it possible to determine the DNA profile from contact traces found on touched objects. These are sometimes the only traces revealed at a crime scene. Establishing a DNA profile from such traces is sometimes crucial to detect the perpetrator.

Certain features of outward appearance are written in the genes, so by examining DNA from the crime scene, wouldn't it be possible to create a portrait of the perpetrator?

In human DNA, we distinguish between coding and non-coding sequences. According to current legislation, genetic testing for forensic purposes may involve a non-coding region. The coding region, on the other hand, contains information of great interest from the point of view of law enforcement and justice, which can bring us closer to creating an image of the material donor. Based on a study of this region, we can determine its eye colour, hair colour, height or age, and even its biogeographical origin. These are tests referred to as DNA phenotyping. Human phenotype testing is not allowed in our country to protect sensitive personal data. However, there are a few places in the world where they can be done - for example, in the United States. Polish investigators handling the high-profile case from Łódź took advantage of this. In December 2020, the corpse of a woman was found. She had gone out to the park with her dog and was later found under a pile of leaves. It was possible to determine the DNA of the alleged perpetrator from biological material revealed at the crime scene. The extensive measures taken in the case were unsuccessful, resulting in the Łódź prosecutor's office commissioning research in the USA to determine the perpetrator's phenotype, making it possible to create his sketch. Unfortunately, to this day, the issue has not been resolved.