The laying flowers under the plaque commemorating August F. Wolff 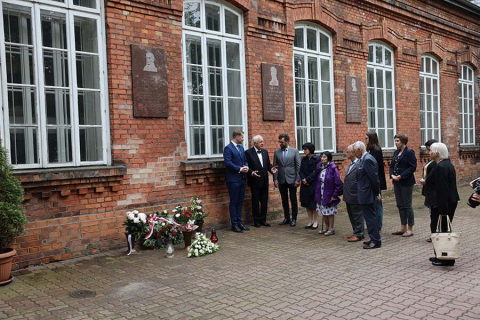 August Ferdynand Wolff was one of the founders of the Medical Academy which gave rise to the teaching of medicine in Warsaw, as well as the first president of the Warsaw Medical Society. Wreaths and candles are laid every year, just before the annual festival of the Society, under the plaque commemorating this outstanding figure located in the Jazdów district of Warsaw. Prof. Paweł Włodarski, Vice-Rector for Internationalization, Promotion and Development of the Medical University of Warsaw, paid tribute to Wolff on behalf of the academic community of the Medical University of Warsaw.

The plaque is embedded in the 7th surgical pavilion of the former Ujazdowski Hospital at 1a Jazdów Street. The laying of flowers and candles under the plaque is a tradition of the Warsaw Medical Society. The rest of the celebrations on the occasion of the anniversary of the Warsaw Medical Society took place in the Doctors’ House and Club. Prof. Jerzy Jurkiewicz, President of the Society, hosted the event. Prof. Marek Kuch, Vice-Rector for Student Affairs and Education represented the Medical University of Warsaw in this part of the ceremony.

August F. Wolff was born in 1768 in Leszno. After graduating from schools in Leszno and Berlin he studied law in Königsberg but abandoned this faculty in favor of medicine at the University of Berlin. He continued his education in Göttingen where he obtained his doctoral degree in 1790. In 1809 he participated in the establishment of the Medical Academy in Warsaw which, after a number of transformations, is still alive as the Medical University of Warsaw. In the years 1810-1817 he was the Chair of the General Medical Council. In 1820 he contributed to the establishment of the Warsaw Medical Society. He was an active member of the Royal Society of the Friends of Science in Warsaw. In 1820 he was awarded the hereditary nobility of the Kingdom of Poland with the coat of arms “Postęp” and in 1828 the Order of Saint Stanislaus. He died in Głuchów in 1846.