For over a year now, we have been living in times that we did not expect coming and were not prepared for them at all. Things were supposed to get better, we were counting on the veracity of the theory of the "end of history" [copyright by Fukuyama], and progress was inevitable and in principle always bore "blessed" fruit. Medicine might no longer be drastically prolonging our lives, but it had certainly sought to make us die as healthy as possible. Frailty, disability, being condemned to the care of others - these miseries were to be replaced by healthy aging, senior citizen policies, and, in countries that had crossed the boundary of natural development and entered ethical hyperspace, also by the right to a dignified (read assisted) death. And here - according to the most repeated theory - one Chinese cook made soup from the wrong bat... And suddenly it turned out that those doctors who did not choose years ago to specialize in infectious diseases made the biggest professional mistake of their lives. Maybe it was better if someone became an anesthesiologist or pulmonologist - these colleagues were carried by the pandemic on its dementor wings to the Olympus of life-saving medicine and dragged into the spinning world of media. The rest of us "in eager rivalry" [copyright by Onufry Zagloba] tried to reorganize their work to effectively treat pneumonia developing at the rate of an acute myocardial infarction (if our trenches were hospital corridors), or to learn to act as a doctor's hotline (if we were shelling out from behind our desks in the clinic). Regardless of our specialty, it was (is still?) a time of war. War by definition, because it destroys previously existing social, economic, and material structures, affects everyone without exception, creates great uncertainty about the future, and causes human casualties. If we replace the word "war" with "pandemic" - the previous sentence still remains true.

How has diabetology, the field that deals with diabetes, a disease that the WHO declared the first non-communicable global epidemic in 2007, fared in this war? How was this war survived - or not – by the people with diabetes? Well, diabetology has suffered serious losses in this fight, but also perversely, has become a beneficiary of the pandemic. How is this possible? When the pandemic broke out, it very quickly became apparent that one in three people undergoing COVID-19 severely or dying from it simultaneously had diabetes. Diabetes in a pandemic was initially thought to be a certain death sentence, but initial analyses of large groups of patients have shown that, indeed, diabetic patients often undergo COVID-19 more severely than others, or even do not undergo it at all because they die, but these are primarily patients with the kind of diabetes that was metabolically unbalanced before and during coronavirus infection, which means that this patients had consistently "high sugars." 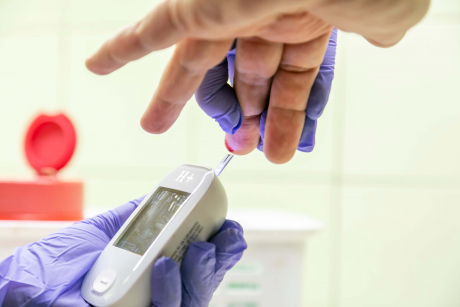 However, as time went on, we began to see other sides of the pandemic as well. First, we have been hit by the explosive growth of telemedicine, which has proven to be quite helpful in diabetes. We have been seeing our patients for years, and if we earn the trust of a person with diabetes, our relationships last until they or we die. And if you've known someone for years - like a doctor knows a patient, that is at a high level of intimacy - then diagnosing and treating over the phone doesn't have to be any less effective than the traditional form of contact. The need for telemedicine solutions has also provided a strong impetus for increased use of continuous glucose monitoring systems and improved blood glucose meters, as they make it possible to transmit patient blood glucose values through "clouds" and seventh mountains [copyright by Stanislaw Rossowski]. Second, we've had a rapid increase in patients with newly diagnosed diabetes, mainly type 2 diabetes. Is it because coronavirus is betacytotropic, so it directly attacks insulin-producing cells? Or is it because multitudes stayed at home for remote learning or work, where the distance to the fridge was minimal, as was the motivation to be physically active, and as a result, half of our citizens - according to the Prime Minister's Office - gained an average of 5.7 kg in 2020. And this, for the risk of developing diseases such as diabetes, is a disaster (although the tax collector from Stanislaw Bareja's “Miś” would be pleased - citizens with higher education gained the most weight). Or, finally, was it because laboratory tests could not be easily performed and the diagnosis of diabetes was not made early enough? All of these factors have undoubtedly played a role in the increasing incidence of diabetes. But this, I don't know how gloomy it would sound, nevertheless favors the strengthening of the role of diabetology (it is more and more needed) and stimulates its development (a lot of patients means a big market and growing investments of the medical industry in this branch of medicine).

Is the conclusion of this argument the gleeful assertion that diabetology will flourish on the ruins of the pandemic? Well it will flourish, though of course it is not a happy statement in the least. It will flourish because it will take many diabetologists to help the diabetic victims of COVID-19. Therefore as it is after a war - and I guess the end of this current one is near - we need to roll up our sleeves, grab wheelbarrows and haul away the debris of overweight, depression, post-Covid brain fog, chronic lung disease and many other complications of coronavirus infection to the dustbin of medical history. It's going to take us a long time, but there is no such trouble we haven’t managed to get out of. Always "a song will go on" [copyright by Wajdelota by Mickiewicz], and our "inner fire will not burn out for a hundred years" [copyright by Piotr Wysocki by Mickiewicz]. So, with a fervent song on our lips cracked from complaining, let's take care of the new shape of the health care - vaccination programs, new rules for financing laboratory diagnostics and nursing care, development of outpatient medicine, including outpatient advanced diagnostic imaging, development of inpatient end-of-life care, unfreezing and making valuations of the National Health Fund more realistic, renovation of withering hospital infrastructure.

These are just a few of the key actions for the coming months. But let the pandemic finish with a happy ending, at least for those who survived it, so that in the not-too-distant future, treatments like those at Leśna Góra hospital will be available not only in the movie studios...